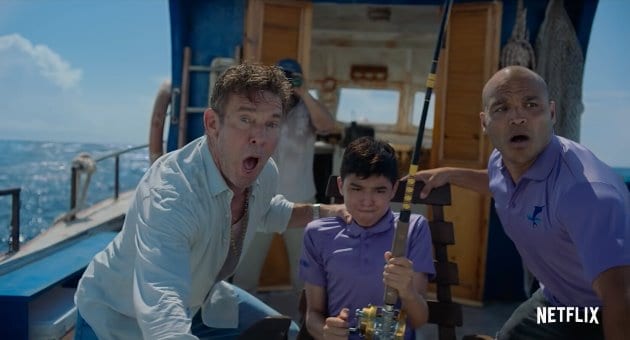 Blue Miracle is an upcoming heartwarming comedy-drama film on Netflix. This true story based film is going to release in May 2021. But the trailer of the film has come out for the audience. So the inspiring story that the trailer showing is of Omar that plays by Jimmy Gonzales. He works with orphans in orphanages naming Casa Hogar.

A hurricane hits the orphanage. All of the inhabitants and staff try to find ways to make ends meet. However, they finally join a fishing competition with a Captain Wade. The role of captain is playing by Dennis Quaid.

The film is written and directed by Julio Quintana who directed Martin Sheen’s drama The Vessel in 2016. On the other side, Chris Dowling is also co-writer of this upcoming story with Quintana. The film has produced by Javier Chapa alongside Darren Moorman, Chris George, Ben Howard, and Trey Reynolds.
The film soundtrack is exclusively produced by Reach Records that will available for the audience along with the film. He is Grammy award winning with label mates GAWVI, WHATUPRG & 1K Phew.

The tale of the film is actually inspiring and motivational. It shows that how everyone comes together to find the way of success in a situation when everything seems dull and against this crew (staff and inhabitants). Above all the logline of the film states that it is the incredible true story of a real-life orphanage name Casa Hogar. A Mexican orphanage for boys who joined the world’s biggest fishing tournament to save their home (orphanage). The Hurricane hits hard the Mexican orphanage came to the Baja California Peninsula in 2014. The trailer of Blue Miracle is showing the happy life of the orphanage before the hurricane. Showing how Omar rebuilds the orphanage is a heartwarming and touchy story that is suitable for the film.

The storm was raging outside, one of the boys in the trailer says maybe God wants all of us unluckiest kids in one building so he can crush us all. While Omar cares a lot for the boys at the Casa Hogar. He tries to feel that they are lovable and worth-appreciated. When he teams them up with captain Wade that movement is also a challenge for him.

Further, the story tells about the Quaid’s Captain Wade. He arrives in the midway of the trailer tells about the Bisbee’s Black and Blue Tournament. Wade proclaimed that he has won this tournament twice. In addition, he told that he has to make his team with local fishermen in Mexico. While on Omar insists Wade willing enlisted the three least annoying boys that they will join him in the tournament, and this crew will try to catch the fish and win the tournament.

Blue Miracle will stream on Netflix on May 27, 2021 for its audience. Fans of Dennis Quaid have a chance to watch him in this inspirational true story.

The Cast of Blue Miracle