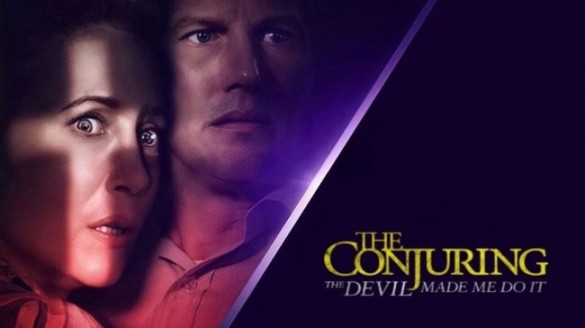 The conjuring 3 is an upcoming American supernatural film on HBO Max. It is also refer as The Conjuring: The Devil Made Me Do It. It is a sequel of The Conjuring from 2013 and The Conjuring 2 from 2016. However, This upcoming sequel is the eighth installment in the overall conjuring universe franchise.

The film is based on the trial of Arne Cheyenne Johnson known as The Devil Made Me Do It. It was the first known case in the United States that proven innocence based upon the defendant’s claim of demonic possession and refuses the personal responsibility for the crime. The murder trial took place in Connecticut in 1981.

The Cast of The Conjuring3

Patrick Wilson (Ed Warren) and Vera Farmiga (Lorraine Warren) will continue their roles in The conjuring 3 as paranormal investigators. Following is the list of some cast members.

The Murderer Claimed the Demon Possession

The trailer of the conjuring 3 shows a story of chilling terror, murder, and unknown evil that have astonished the real-life paranormal investigators name Ed and Lorraine Warren. Its story is one of the most sensational cases from their files. The film opens with a fight for the soul of a young boy. However, the story takes the investigators to anything but they have not experienced before. It was the first time in the history of the United States that the murderer claimed the demon possession as a defense and refused the responsibility of the crime.

Development of the Film

In 2016 James Wan gave his statement about the sequel of the film and stated that there could be many more such films as investigator Warrens has a good stock of such stories. Chad and Carey W. Hayes as screenwriters also expressed interest to do work on the next sequels. But Wan was excused for not giving time as his commitments with other projects. Wan mentioned his team of conjuring lucky to have its third season. He also said other filmmakers can continue with the conjuring team in the conjuring world. He suggested that the third season could ideally make in the 1980s and based on lycanthropy following the classic American Werewolf in London style. In May 2017 Safran added it would be unlikely if the third installment would be a “haunted house” film.

In June 2017 it was announced that the development of the third installment has started. David Leslie Johnson-McGoldrick wrote the screenplay of conjuring 2 and he also hired for this sequel. In August 2017, Wan informed Entertainment Weekly about the working of the film as filmmakers are working hard on the conjuring 3 and at the middle of the script. He added we are trying to make the script in a good place. In September 2018 the producer Peter Safran said the script is near to complete and its production would start in 2019. In 2019 it was announced that James Wan co-write the story with David Leslie Johnson-McGoldrick.

Release Date of The Conjuring 3

The upcoming part of conjuring has planned to release in the United States on June 4, 2021. It will distribute by the Warner Bros. Picture however, the film will stream by HBO Max simultaneously for one month. Its original date was decided on September 11, 2020. But due to the COVID-19 pandemic its releasing date was delayed.

Now the fans of the conjuring universe are waiting for the upcoming The Conjuring 3 to watch the horrific and spin chill story.