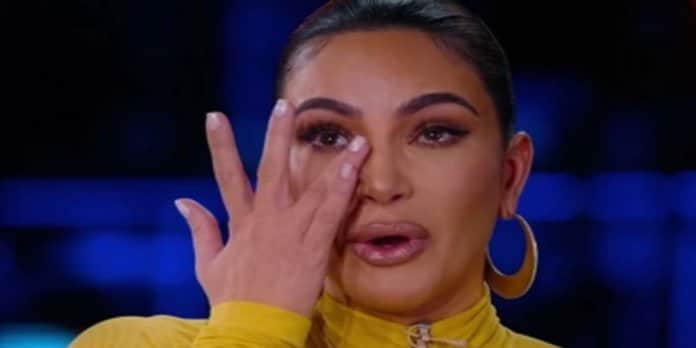 Kim Kardashian one of the special guests appearing in the upcoming and un-awaited Netflix talk show “My Next Guest Needs No Introduction” by David Letterman. That is going to release on the 21st of October. The trailer of the show released on Tuesday, 6th of October, and Kim Kardashian was seen breaking down into tears while talking on David Letterman’s show.

The 3rd Season was about the lives of the guests. The previous guests of the show were George Clooney, Barack Obama, Tiffany Haddish, and Tina Fey.

The veteran broadcaster asked; ”No no no no, are you alright” to Kim.

She said; “I wonder and I’m crying? I’ve talked about this before” while wiping her tears off.

In a scene from the teaser of the show, Kim and Letterman visited a store and took selfies. She taught David how to use AirDrop in that scene.

It not cleared yet what forced Kim Kardashian emotionally and made her cry. But her fans seen praying that whatever the reason behind, she would be fine.

In the Behind the Scenes images released by Netflix, we saw that she supported by Kanye West; her husband. He appeared himself on the show in one of the previous seasons with his sisters Khloe and Kourtney Kardashian I’m the backstage. There were many tweets about the crying scene of Kim but she cleared that she doesn’t care about these tweets as she did not cry intentionally on the spot.

The other two-minute video of the trailer shows that Lizzo is in her home studio and Dowret Jr. is with goats. David tried his hand for recording.

Lizzo opened up that; ”When I was wearing a leotard on stage and said ’I love myself’ the audience present there were like ’How dare she love herself’ How could anyone love their own self?’ David answered supporting her that the people are always jealous of the stars.

The singer delivered a beautiful message about self-acceptance and beauty and also taught Letterman her trademark flute’s basics, saying; ”I know that I’m beautiful and successful, so ok make fun of me now.” Lizza said.

Dave Chappelle also featured in the show and was talking about the Black Lives Matter Movement from his Ohio farm stage.

Chantelle said; ”I was shocked that nobody ever talked about what it feels like to watch a man get murdered that way, by a man in a police uniform. She doesn’t want retroactive justice. I don’t want you to get ’em when I’m dead and I don’t want you to stop it.”

After knowing the above information and watching the trailer of the show, it is too difficult to wait for the show but yeah the show is about to release soon on October 21st by Netflix..